We are incredibly happy to have Safer Chemicals Healthy Families as our ShiftCon Welcome Reception sponsor this year! They  have had tremendous success with their “Mind the Store” campaign pressuring large retailers to create and sustain a dynamic policy for protecting the public from harmful chemicals.

Make sure to come in a good mood. We will spend some time mingling and then our program will begin. Our leadership team will separate everyone into groups and we will enjoy games and have some interesting discussions. Then later, our awards ceremony will begin.
Safer Chemicals, Healthy Families and its Mind the Store Campaign are sponsoring a special awards ceremony, but before they begin they are here to update you about the success of our movement in large retail stores. To kick off ShiftCon, the organization will share the latest on the fight to reform of our nation’s broken chemical safety system and campaign to get the nation’s largest retailers to drive toxic chemicals out of products and commerce. They  will also hold an awards ceremony to honor leaders that played an important role in the fight for real and meaningful chemical reform.
Special Question to Ponder
But before this event starts, I would like to ask you who’s minding the store? Would you like to know? Safer Chemicals has created a report card just in time for the holidays that grades top retailers on their actions to reduce and eliminate toxic chemicals. Sadly, the average grade has been a D+, indicating a significant need for improvement by retailers to meet rising consumer demand for safer products.
Mike Schade, the Mind the Store Campaign Director for Safer Chemicals Healthy Families is reaching out to partner with you to rid our world of toxic chemicals. Here’s a word from our sponsor…

We wanted you to be among the first to know we’re releasing a BIG new report card grading the nation’s biggest retailers on steps they’re taking (or not) tackling toxic chemicals, three years since we’ve launched the Mind the Store campaign and just in time for the holiday shopping season. 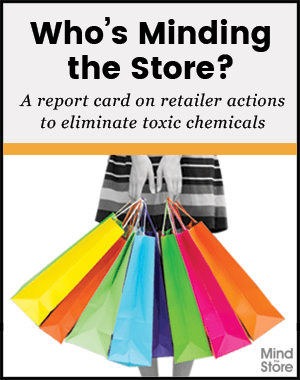 “Who’s Minding the Store? — A Report Card on Retailer Actions to Eliminate Toxic Chemicals,” is the first major evaluation of eleven of the United States’ largest retailers’ safer chemicals programs.

For those of you that have blogged about the campaign and retailers before, this is a great opportunity to take a step back and look at the progress that’s been made, and where the laggards need to catch up!

The investigation revealed that while some leading retailers (Walmart, Target and CVS) are making significant progress to move the market away from toxic chemicals, other top retailers (like Amazon, Costco, Kroger and Albertsons) remain serious laggards.  The report card will reveal new public commitments, policies and initiatives from Target, CVS and Best Buy that have never been disclosed before.  You’re not gonna wanna miss this one.

Would you be interested in blogging on the report card, or sharing on social media, starting on Wednesday?  Wehave materials that can make it super easy to prep, write on and share including

Let me know if you’d like embargoed copies of any of these materials.

In conjunction with the release, we’re also launching a new action alert targeting the eleven retailers graded in the report card.

We’d love to partner with you to make the release of this as big of a splash as possible, especially with the holidays approaching. Thanks all!

SHIFTCON WORKSHOP: Going Pro–Using Email to Grow Your Audience and Turn it into a Profitable Business
November 18, 2016

Meet Some Of Our 2022 Speakers
Recent Posts

Hey friends! This is your last chance to apply to

Did you hear the news! shiftcon has new dates for

Day 3 of #ShiftCon has more great workshops for yo

Day 2 of #ShiftCon has more great workshops for yo

We are excited to announce a workshop intensive wi

IT'S SHIFTCON WEEK!! We are just 3 days away from

We are thrilled to announce another keynote for #S

Raise your hand if you could use a giveaway? 🙌

Did some say happy hour? Okay maybe not but it's M

We are excited to announce another great workshop:

Staying healthy is something that is on all our mi

Even though we are virtual this year we still enco